This is painted on a 5 x 7" gallery wrap canvas. This is one of my sister's chicks. They are so cute when they are little. Wish I had more photos of baby chicks. I had an incident where I had one out to photograph and he got away from me. He ran under a group of bushes and I totally lost him. I looked for him for 30 minutes before a terrible thunderstorm came up and made me abandon the search. I went in the house just grief sricken. I was a chick killer.
I haven't mentioned all the cats my sister owns. Alot. Really bright to get out a baby chick with stalkers all around. How could I have forgotten all the Sylvester and Tweety bird cartoons I used to watch?

Long story a little shorter, about an hour later, after the storm passed, my brother in law Hamilton noticed one of the cats stalking the bushes where I lost the chick. Ta Da....Hamilton went out there and found the chick. I always knew he was a chick magnet.
Are we supposed to talk about art in these blogs? 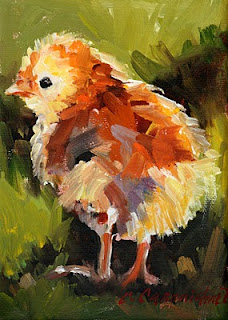