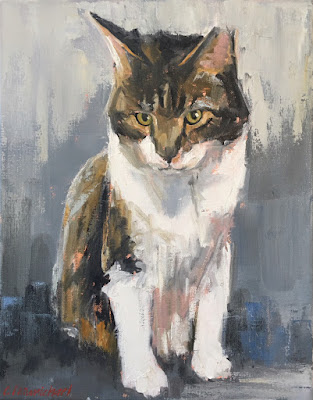 sold
Who names a cat Josh?  Cats needs two syllable names.  It is true that in the South one syllable names can easily be turned into two syllables. Jah..ush!  Jah...ush belongs to my good friend's daughter who lives in Boston.  He is named after Josh from the show "West Wing". This was commissioned by my friend as a 30th birthday gift for her daughter.  Josh was thought to be a feral cat and in Boston they neuter cats and clip their ears to indicate that the procedure has been done.  Josh was discovered not to have been feral and lives a cushy life in Boston with Kendal.  Happy birthday to Kendal and happy life to Jah...ush.